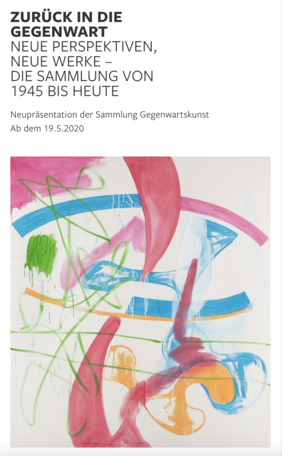 Back to the Present

New Perspectives, New Works – The Collection from 1945 to Today
New presentation of the Collection of Contemporary Art
As of 19 May 2020

Almost a decade after the opening of the Garden Halls, the collection of contemporary art is being presented for the first time in the Städel Museum. Around 230 works by 170 artists from different schools, styles and associations open up surprising comparisons, perspectives and lines of sight amidst the direct presence and roots of the collection in past decades.

Starting from the collected space of the spherical 3,000 m² garden halls and beginning with major works of the younger and most recent contemporaries, a history of art after 1945 unfolds. On the occasion of the new presentation, a large number of recent acquisitions and donations will also be on view for the first time, including works by Miriam Cahn (born 1949), René Daniëls (born 1950), Carlos Cruz-Diez (1923-2019), Jimmie Durham (born 1940), Asta Gröting (born 1961) and Victor Vasarely (1906-1997). Using a wide variety of narrative strands, the new presentation allows a user account of art after 1945, which deliberately makes the collection experienceable not chronologically but thematically instead. The dissolution of the depicted object into abstract, formless paintings is conveyed across decades as well as the real-time entry of gestural painting and its consequences for the following decades. The aesthetics of geometry and everyday objects, which are regularly charged with innovative meanings and references, are also shown in their various forms and thematic points of reference. Walking through the rooms and squares of the Garden Halls, the audience can follow how the figure finds its way back into the picture, how painting conquers the - real - space, or how the seemingly competing media of painting and photography find a mutual exchange.

Wolfgang Tillmans' (b. 1968) abstract photography Freischwimmer 54 (2004), for example, enters into a dialogue with the assemblage Zimbal (1966) by Gerhard Hoehme (1920-1989) or Raymond Hains' (1926-2005) collage Coup de Pied (1960), the sculptures of Jessica Stockholders (b. (born 1959) #358 (2001) and Isa Genzken's (born 1948) Wind I (David) (2009) lead over to Blinky Palermo's (1943-1977) fabric painting (1970) or Yves Klein's (1928-1962) sponge relief Relief éponge bleu (1960). Daniel Richter's (born 1962) abstract-figurative painting is linked to Francis Bacon's (1909-1992) investigation for the children's nurse in the strip "Battleship Potemkin" (1957) and James Turrell's (born 1943) walk-in color space Paluka (1992) is brought into communication with Victor Vasarely's Op-Art. Dirk Skreber's (b. 1961) photorealistic-looking painting leads to Thomas Demand's (b. 1964) self-constructed and photographically recorded rooms. Beyond the apparently widespread paths of art after 1945, selected presences become visible: the most diverse readings and identifications of the art of the time, which sometimes run in real time, overlap or expand, contradict and comment on one another. The conclusion is a parcours through seven decades of contemporary art that allows the public to understand its own art history in a personalized way and according to its own interests.