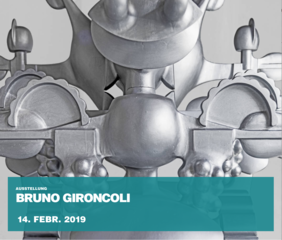 The eccentric Austrian is one of the most important sculptors of his generation. In a personally colored imagery he created from the early 1960s, a very idiosyncratic oeuvre. With always newfangled groups of works, he managed to find a distinctive, surprising language. In the course of all of this, man with his abysses was at the center of his artistic work. Gironcoli's aesthetics of self-indulgence and opulence, which was constantly developing growths and flourishes, has inspired countless younger artists. In a haunting exhibition, the SCHIRN presents excerpts from Gironcoli's late work. The monumental sculptures appear like prototypes of a novel species, set in shiny, seductive surfaces of gold, silver and copper. They are strange and yet familiar with their organic forms and the set pieces of an everyday culture, which is usually based on the local: Soon one believes to recognize a wine barrel, an ear of corn, a grapevine. Thereupon Gironcoli stages a strange parade of infants or an imposing ants-like sculpture. His grandiose and irritating works impress innovative generations of viewers at any given time.

> Way from ARTime to Schirn