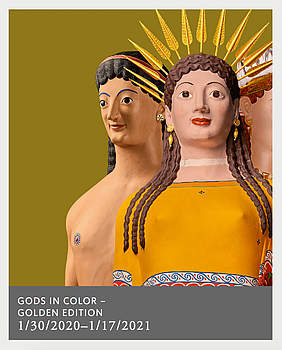 The colorfulness of ancient Greek and Roman sculpture has been delighting a worldwide audience for more than 15 annos. Around 3 million visitors were able to experience the "Colored Gods" in museums around the world.

The Liebieghaus Skulpturensammlung is currently demonstrating an extraordinary, expanded exhibition that allows a modern, diverse view of the irritating phenomenon of statue polychromy. "COLORFUL GODS - GOLDEN EDITION. The Colors of Antiquity" shows more than 100 objects from international museum collections and the Liebieghaus inventory, including 60 reconstructions from the last Annos, but equally some from the 19th century, both 22 graphic works.
Since the exhibition "BUNTE GÖTTER" was first shown in Frankfurt in 2008, the number of reconstructions developed by the research team has doubled and modern aspects such as the colorfulness of ancient bronzes have been added.

The color dress of an antique sculpture authentically did not exclusively extend its aesthetic appearance and increased its liveliness, but instead provided the antique viewer with fundamental data for identifying the person presented. In the past decade, science has been able to devote more attention to this aspect. To this end, new-fangled interpretations were conceived not only in the course of the Greek great bronzes, but also for a number of marble sculptures. The lively use of colors was a matter of course in the ancient world of the eastern Mediterranean. Nevertheless, the Greeks and Romans did not color their sculptures exclusively without difficulty. Rather, the coloring with its own means extended the nominal and narrative structure of the work of art. Only by means of the color dress did the artists achieve the selected vitality of the sculpture.