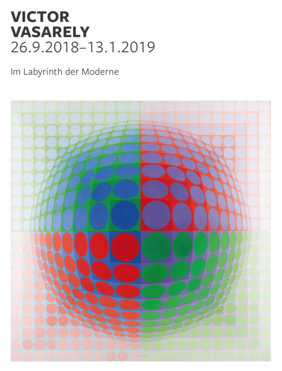 In the labyrinth of modernity

VICTOR VASARELY - In the Labyrinth of Modernity


Victor Vasarely is the dazzling protagonist of European Op Art and a major figure in French post-war art, whose work is inspired by the teachings of the Bauhaus of the 1920s. The retrospective at the Städel Museum reveals Vasarely's six-decade work, which stands for a multi-faceted, labyrinthine innovation amid avant-garde and pop culture.

The Städel Museum presents the large-scale special exhibition "Victor Vasarely. In the labyrinth of modernity ". On the basis of more than 100 works, the retrospective presents the inventor of Op Art of the 1960s. Victor Vasarely's (1906-1997) oeuvre spans more than 60 years and is regulated by a variety of styles and influences. The direction of the century artist is traced with bundled works of all phases of the work. The artist, reduced many times to his op art, unites the art of the early innovative East and Central Europe with the avant-gardes of the swinging sixties in Europe and America. He used his lifetime of classical media and genres and built in the 1950s, the multiple, the mass production and the arrangement in his wide-ramified work. At the same time, the exhibition looks back to Vasarely's artistic beginnings with works such as "Hommage au carré" (1929) or figurative paintings such as "Autoporträt" (1944). From his earliest works, such as "Zèbres" (1937), to his "Noir-et-Blanc" period of the 1950s, the selection extends to the main works of Op Art, such as the Vega pictures of the 1970s. Vasarely's extensive retrospective sees itself as the rediscovery of a twofold 20th century artist figure that reflects the innovative as well as the extra in all its complexity.