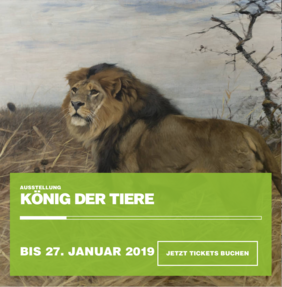 KING OF THE ANIMALS

WILHELM KUHNERT AND THE IMAGE OF AFRICA

Like no other painter of his time, Wilhelm Kuhnert (1865-1926) has shaped the demonstration of Africa in Europe as well as in the United States. At the end of the 19th and beginning of the 20th century, he was one of the first European artists to increasingly travel to the then largely unexplored colony of German East Africa.

The drawings and oil sketches of the local flora and fauna, which were made during these travels, served as models for monumental paintings, which he made after returning to his studio in the federal capital.

Kuhnert exhibited with great success around the world and became the leading interpreter of African wildlife. The Schirn Kunsthalle Frankfurt presented from October 25, 2018 to January 27, 2019 with spherical 120 works the introductory significant retrospective on the life and work of the artist.

The exhibition contains not only examinations and paintings from European and American museums, private collections and the estate of Kuhnert, but also countless printed and advertising prints as well as publications by the artist.