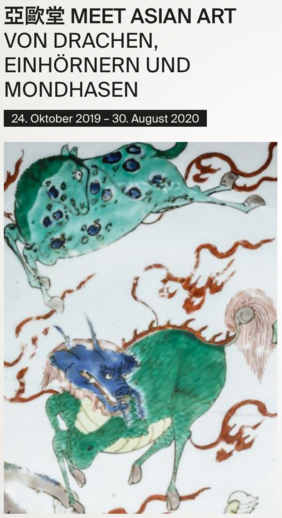 
The world of creatures is one of the most fascinating areas of China's visible culture. The depiction of nature, and in particular of animals as well, has long been circular since 2,500 Annos to the most substantial expressions in the Middle Kingdom.

At the same time, mythical-fictional creatures appear even more frequently as images of real animal life. Now together with the 4th and 2nd century BC. The book Shanhaijing ??? ("Classics of the Mountains and Seas"), based on ancient oral tradition, contains hundreds of Saga animals and curious creatures in an encyclopaedic outline.

From the extensive Asian collection in the Museum Angewandte Kunst, this demonstration shows selected examples from the most different materials, which reflect more than 2,000 years of Chinese cultural and intellectual history.