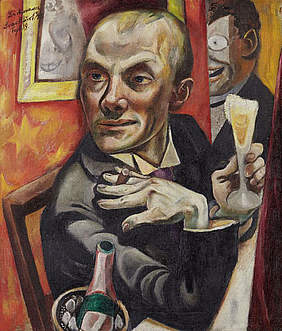 Max Beckmann spent the longest and most important time of his life in Frankfurt am Main. Here he developed into an artist of international standing between 1915 and 1933. The Städel Museum began collecting works by the artist early on. The focus of the exhibition is the most recent acquisition: Beckmann's “Self-Portrait with a Champagne Glass”, which programmatically stands for his intensive preoccupation with the genre of the self-portrait.Max Beckmann (1884–1950) is more closely connected with the Städel Museum and Frankfurt than almost any other artist, where he created a large part of his central works and developed his characteristic style. The Städel Museum has been collecting and researching his oeuvre intensively for almost a century. Since 1918, works by the artist have been continuously acquired; today the museum has one of the world's most extensive Beckmann collections.One of the artist's best-known and most significant works, "Self-Portrait with Sektglas (1919)", was recently secured for the Städel. This icon of modernism was acquired thanks to the support of the Städelschen Museums-Verein, the Ernst von Siemens Art Foundation, the Federal Republic of Germany and the Kulturstiftung der Länder as well as five private patrons. In a special presentation, the Städel is devoting selected paintings, works on paper and documentary material to its Beckmann holdings and the artist's years in Frankfurt. The focus is on the "self-portrait with champagne glass".